Grade 5-8–Dubbed Spirit and Opportunity in a naming contest won by a nine-year-old, the two golf-cart-sized rovers sent to Mars in 2003 were designed to last for three months. Battered but game, they're still inching along all these years later. Here Siy not only pays affectionate tribute to their longevity–titling her final chapter Shake off the dust, recharge at the rest area, and continue indefinitely–but also describes and explains in exact detail their most stirring discovery: strong evidence that water once drenched, dribbled, dripped, doused, trickled, gushed, and poured on the Martian surface. An array of large illustrations includes a labeled diagram that identifies all of the rovers' scientific gear, plus color photos, photo composites, and (carefully identified) artists' conceptions of Martian vistas, craters, rocks, and even microscopic features. Closing with plenty of useful end matter and a full-page planetary portrait, this title will sweep readers up in an exploratory mission that has come closer than any other so far to finding sure signs of extraterrestrial life.–John Peters, New York Public Library

In 2004, two unusual robots landed on Mars: Spirit and Opportunity. Controlled by scientists at NASA, the golf-cart-sized, remote-controlled rovers roll slowly across the planet s terrain, collect and analyze geological samples, and transfer data (including pictures) back to earth. Although the rovers were designed to last for 90 days, they continue to work more than five years later. In this well-designed book, Siy provides a clearly written overview of the rovers explorations on Mars. The inclusion of many quotes from astronomer Steve Squyres, principal investigator for the Mars rover mission, offers a scientist s point of view on day-to-day challenges and rewards of the project, which succeeded in finding traces of water in the planet s geological record. The book s fine paper quality allows for excellent reproduction of the well-captioned illustrations: photos taken on earth, color and black-and-white images from Mars, artistic conceptions of space scenes, as well as a clearly labeled diagram of a Mars rover. Appendixes include a bibliography, a glossary, a brief source note, and a page of additional information with pointers to related Web sites, including one that tracks the current status of Spirit and Opportunity. Handsome and informative. 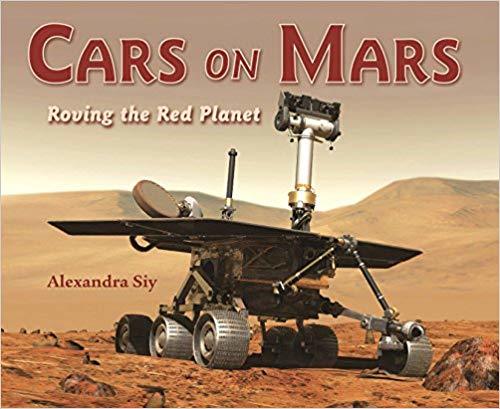 "CARS ON MARS grips the kids with its title, then hauls them into a great story laden with facts that are consistently interesting."

BRISTLECONE: THE SECRET LIFE OF THE WORLD'S OLDEST TREE

VOYAGER'S GREATEST HITS: The Epic Trek to Interstellar Space
CARS ON MARS: Roving the Red Planet
UP Close with SPIDERS
Up Close with BUGS

FOOTPRINTS ON THE MOON
SNEEZE!
MOSQUITO BITE
ONE TRACTOR